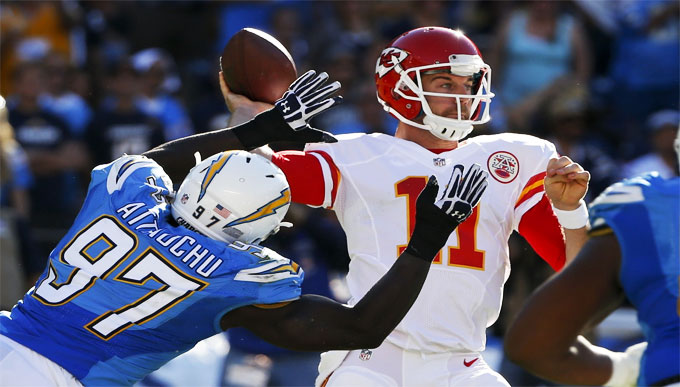 If you’re waiting for the Chiefs to have one of those Andy Reid “bad loss” games, you could be waiting awhile.  Kansas City rolled into San Diego all Top Gun style on a mission and the NFL’s best defense right now carried the day.  This city seems to be waiting for a let down out of the Chiefs and most people still haven’t bought in yet, but what our eyes are watching is something we haven’t seen in years.   Winners of four in a row, the Chiefs have outscored their opponents by a whopping 91 points.  91.  That’s like an Alabama non-conference differential.

While the Chargers have been terrible at closing out games, their offense has been consistently good all year.  Phillip Rivers may lead the NFL in passing yards this year and overall, this was the fourth best offense in the league.  The Chiefs brought them to their knees.  Rivers threw for just 189 yards and Justin Houston lit him up with a circus pick six that made it look like these teams don’t belong on the same field together.  It was Rivers’ fewest yards in a game since the Pats locked  him down last December.

This brilliant performance by the Chiefs pulled the team even on the year at 5-5 and now most people think KC is playoff bound.  KC is still three back of Denver in the West with only 6 to play so that’s looking grim.  But crazier things have happened.  The Broncos still have the Pats, Steelers and Bengals on their schedule. The Chiefs, in contrast, will be favored in all six games that remain.  For now, the Chiefs will have to keep their eyes on the Wildcard race.

So let’s look at the contenders.  KC is 5-5 with Houston and the Jets and KC owns tiebreakers over both.  The Chiefs beat Houston and have a better conference record than the Jets.  The Jets look like the biggest threat but still play the Patriots and have road games at  the Giants, Cowboys and Bills.  If the Bills lose at New England tonight, there’s another 5-5 teams.  The Chiefs host the Bills Sunday at Arrowhead at noon and can get another sweet tiebreaker with a win.  Tickets For Less has great seats available in every price range of the stadium.

The Steelers are a game clear at 6-4 but KC has that tiebreaker, too, if they can pull even by the end of  the year.  Basically, this playoff picture looks too good to be true.  This team was 1-5 and going nowhere and now has the look of a world beater. Nobody is scoring on KC and that means every game is more than in play.  This team looks more like a team that will win in the post season than one that will just arrive in the post season.  Nobody wants to play the Chiefs right now, not even the banged up Patriots.

This team reminds me a lot of the Giants Super Bowl teams.  Defense, field position and a running game are key.  The Giants were 7-7 four years ago when Eli Manning stopped turning the ball over and they never lost again.  Eli’s not a guy that had to carry his team on his back, when he tries, he throws interceptions.  But he was plenty good enough to beat the Patriots 17-14 and 21-17 in Super Bowls.  Sound like something the Chiefs could do?  Alex Smith hasn’t turned it over in 7 games and the defense may be the best in the league.  This is getting fun.  Now at 5-5, forget the record, it’s a whole new season.  A season where anything now seems possible.