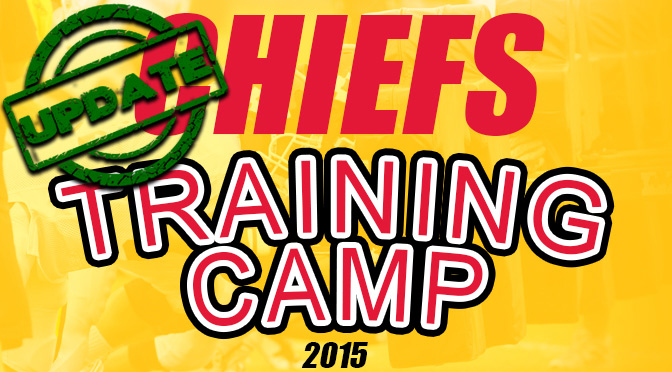 As training camp comes to an end in St. Joseph, Missouri, the Kansas City Chiefs have put in tremendous work in front of fans.

In Wednesday’s practice, Berry received a rousing applause from fans when he picked off a pass and returned it for a pick-6 touchdown.

Although it was in a practice setting, the mere fact that Berry is on the field making plays again is a testament to his effort to fight a brutal illness and return to performing at the highest level possible.

What is expected of Berry moving forward, as Reid and GM John Dorsey have said, is entirely on Berry’s schedule and terms. The team is going to let him come back at his pace and comfort level, and if he says he feels good and can make an impact in a game setting, the Chiefs are going to play him.

Physically Berry is in football shape and worked hard during his treatment to stay at peak physical condition. The question is whether his mind and reactionary skills are football ready. If the coaching staff feels as though he is back mentally, you can expect to see plenty of No. 29.

Newcomer Jeremy Maclin, who has battled some nicks and bruises through the last week of camp, said Wednesday that his chemistry which Alex Smith is good and the two are starting to get on the same page with one another.

Jamaal Charles took it a step further when talking about his team, saying, “the sky is the limit for us. We’re building something special here.”

Of course, no player is going to come out and tell you things are terrible and the team is no good, but when you look at the talent on both sides of the field and the playmakers Reid has on the special teams side of the ball, the Kansas City Chiefs have the potential to be one of the AFC’s best teams.

Former Georgia receiver and draft pick Chris Conley has put his athleticism and skills on display in camp recently, and first-round pick Marcus Peters has recorded six interceptions among the many passes defended through training camp.

If the Chiefs can put the pieces together, they will indeed have a high ceiling and compete for a division title.

The most dynamic unit should clearly be the defense, led by Tamba Hali, Justin Houston, and Derrick Johnson. The pass rush led by those three is formidable for any opponent the team will face. Add in Dontari Poe when he is able to return from injury, and the Chiefs may have the single best pass rush in the NFL.

Saturday, the team will put the first team offense and defense on the field for the first quarter against Arizona, giving fans a chance to see the playmakers and No. 1’s for the upcoming season as it stands following camp.

Have you purchased your tickets yet? Tickets For Less has the best seats at Arrowhead stadium at a great price and no hidden fees! Get your tickets today and choose from a wide selection of seats around the stadium and don’t miss any of the action during the 2015 season.