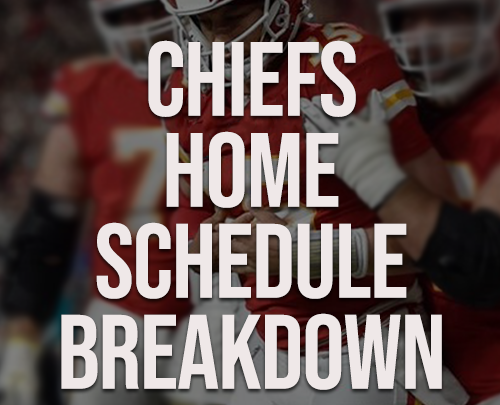 With the NFL season almost upon us, we wanted to break down the Chiefs home schedule for the 2021-22 season. With a new 17-game schedule, Kansas City will host nine regular season home games at Arrowhead.

In week one, the Chiefs will take on one of the top threats in the AFC in the Cleveland Browns. Coming off their first playoff appearance since 2002, the Browns made some major signings this offseason. Players such as Jadeveon Clowney and John Johnson III should provide immediate help in the pash rush and the secondary, and new first and second round draft picks Greg Newsome II and Jeremiah Owusu-Koramoah project to be starting as rookies. This game will be a great early test for the Chiefs after the divisional round showdown last season.

After a week two trip to Baltimore, the Chiefs will return home for their first divisional matchup against the Los Angeles Chargers. With rising star quarterback Justin Herbert entering his second year with a much-improved offensive line, the Chargers will almost undoubtedly be a better team this year than they were in 2020. After signing perennial All-Pro center Corey Linsley, drafting Rashawn Slater, and resigning many other key pieces, the Chargers could pose a real threat to the Chiefs sooner than most people think.

After a week four matchup in Philadelphia, the Chiefs will return to Arrowhead for a rematch of the AFC Championship game against the Buffalo Bills. Over the offseason, the Bills were able to keep the offensive line intact and add veteran wideout Emmanuel Sanders, most likely making the offense at least as good as they were last year. In addition, the Bills resigned star linebacker Matt Milano who will be the leader of a solid defense. This game will be another great test for the Chiefs early in the season.

In weeks six and seven, the Chiefs will travel to Washington D.C. to play the Football team and Tennessee to play the Titans, both of whom were playoff teams in 2020. After a grueling start to the schedule, the Chiefs might finally have an easier game with the Giants at home in week eight. With a similar roster to their disappointing team in 2020, the Chiefs should be able to handle business against the likely third or fourth place team in a poor NFC West division.

In weeks eight and nine, the Chiefs have their first back-to-back home stint. In week nine, the Chiefs will take on the Green Bay Packers in what will be one of the games of the season should star quarterback Aaron Rodgers suit up for the Packers in the 2021-22 season. After keeping most of the roster from their near Super Bowl attending team, the Packers should have another great season if Aaron Rodgers is still there come September. This game will be yet another test for the Chiefs who clearly boast one of the most difficult schedules in the NFL for the 2021-22 season.

After another divisional rival matchup in Las Vegas in week 10, the Chiefs will come home for another tough game against the Dallas Cowboys. With star quarterback Dak Prescott returning from injury, the Cowboys should pick back up right where they left off before Prescott’s injury as one of the best offensive teams in the NFL. After adding one of the top prospects in the 2021 NFL Draft in linebacker Micah Parsons, the defense should be better than in previous years.

Coming off their bye week in week twelve, the Chiefs will host their division rival Denver Broncos at Arrowhead. After a poor season in 2020, the Broncos’ roster stayed fairly similar over the 2021 offseason. The Broncos were able to resign safeties Justin Simmons and Kareem Jackson which will pay dividends for their secondary. Although the team has improved, the Chiefs should be able to take care of business against a rather mediocre team in the Broncos.

Following a week thirteen matchup against the Broncos, the Chiefs will host another division rival in the Las Vegas Raiders at home in week fourteen. After an offseason that left a lot of questions about the franchise unanswered, the Raiders should be an average NFL team again in 2021. The team traded away or didn’t resign every member of their starting offensive line unit, leaving Derek Carr with a very shaky line leading up to the 2021-22 season, even after drafting Alabama lineman Alex Leatherwood in the first round. The Chiefs should be able to handle the Raiders again in week fourteen.

In their final home game of the season, the Chiefs will take on the Pittsburgh Steelers in week sixteen. After a successful offseason that included the resigning of receiver JuJu Smith-Schuster, the Steelers should be able to produce a similar record to their 2020 season. With quarterback Ben Roethlisberger returning for what is likely his last NFL season, the Steelers will try to make one more run at a Super Bowl with the seasoned veteran behind center. While the Steelers will be a strong opponent, the Chiefs should be able to defeat the Steelers barring a poor performance.