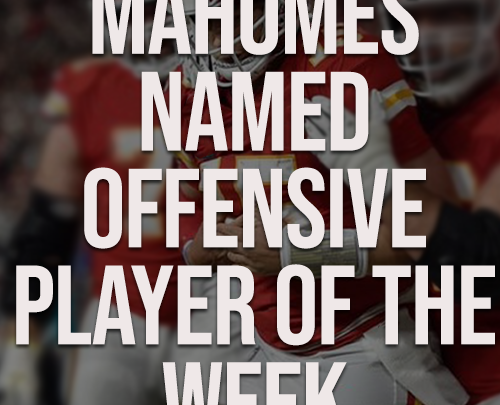 Patrick Mahomes was announced as the AFC Offensive Player of the Week on Wednesday, marking his sixth time earning the award. Mahomes led the Kansas City Chiefs to their first win of the season against the Cleveland Browns, accounting for four touchdowns and zero turnovers.

Mahomes had an outstanding game, finishing 27-of-36 for 337 yards and 3 touchdowns through the air. He also added a rushing touchdown in the first half. Mahomes completed his seventh career fourth quarter comeback and has now won ten career games when trailing by 10+ points.

Sunday’s victory also came with a few more records for the Chiefs quarterback. Mahomes surpassed Dan Marino’s mark of 116 touchdowns through a quarterback’s first 50 games, getting his 117th on a quick strike to Travis Kelce. Mahomes also passed Kurt Warner for the most passing years through a player’s first 50 games, getting to 14,489 by day’s end, 117 more than Warner. Mahomes did all of this in just his 47th game.

With this week’s POW award, Patrick Mahomes also holds the title of earning the most Offensive Player of the week awards for a quarterback in Chiefs history.

UP NEXT FOR THE CHIEFS

The Kansas City Chiefs travel to Baltimore this weekend to battle on the Ravens on Sunday Night Football. If Patrick Mahomes can continue his success against the Ravens, he could earn AFC Offensive Player honors in back-to-back weeks for the second time in his career!

In three career games against Baltimore, Mahomes is 3-0 while averaging 379 yards and 3 touchdowns per game. | STATS

Looking ahead, the Kansas City Chiefs will travel back to Kansas City in week 3 for a divisional matchup with the Los Angeles Chargers. The game will mark the second home game for the Chiefs, and it will be played at noon on September 26th.

This divisional matchup game will be one you won’t want to miss. On January 3rd, the Chiefs faced the Chargers with the Chargers coming out on top and winning 38-21. Week 3 has the potential to be a revenge game for the Chiefs, who will look to prove why they are still the champions of the AFC West. | CHIEFS TICKETS