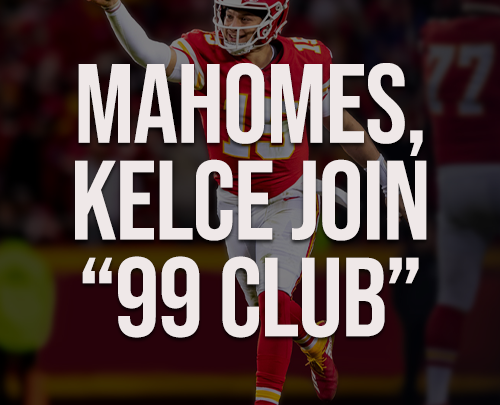 In recent days, EA Sports has been releasing the members of the “99 Club” for their Madden 22 video game. The game is set to release on August 17th.

Two Chiefs gained the distinction of being in the “99 Club”. Star quarterback Patrick Mahomes and tight end Travis Kelce each made the list. This marks Mahomes’ third straight season being rated as a 99 overall in Madden. That is the second longest streak behind Aaron Donald. Additionally, Mahomes is the only quarterback in Madden 22 to gain a 99 overall rating. Tom Brady is the second highest rated quarterback at a 97 overall.

While Mahomes had earned the distinction before, this marks Kelce’s first appearance in Madden as a 99 overall. Kelce is the only tight end that was given a 99 overall rating, while George Kittle is the second highest rated at a 96 overall.

The other Chiefs that were able to earn above a 90 overall rating were safety Tyrann Mathieu who scored a 95 overall, and Chris Jones who secured a 92.

You can see Mahomes, Kelce and the rest of the Chiefs ten different times at Arrowhead this season. The lone home preseason game is Aug. 27 against the Vikings, with the regular season opening at Arrowhead on Sep. 12 against the Browns. | CHIEFS TICKETS