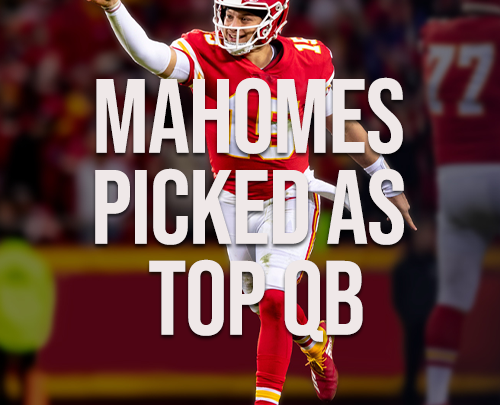 Jeremy Fowler of ESPN released a ranking of the NFL’s top 10 quarterbacks for 2021 as voted on by executives, coaches, and players.  Chiefs quarterback Patrick Mahomes topped the list. | CHIEFS TICKETS

It should come as no surprise that Kansas City Chiefs quarterback Patrick Mahomes was ranked first, just ahead of 2020 NFL MVP Aaron Rodgers. Full list:

While many believe Aaron Rodgers should be at the top of the list, it’s hard to argue with Mahomes’ track record. Since 2018, Mahomes leads the NFL in passing touchdowns and total QBR, trailing only Matt Ryan in passing yards.

This is the second straight year that Mahomes has been slated in the number one spot, and there is little reason to believe that he won’t play to that level this upcoming season. With the Chiefs acquiring offensive linemen Orlando Brown, Joe Thuney, Kyle Long, Creed Humphrey, and Austin Blythe, along with the return of Laurent Duvernay-Tardif, Mahomes should have infinitely more time to throw than he has in the past.

The only real area for improvement on the Chiefs offense is the wide receiver position, which was a position that was mostly ignored during the draft and free agency. Third-year receiver Mecole Hardman will be taking over as the second wide receiver in place of Sammy Watkins who left for Baltimore in free agency.  Draft pick Cornell Powell will also get a chance to make his mark.