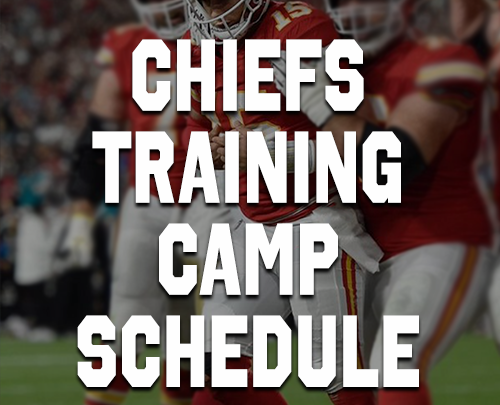 The Kansas City Chiefs announced that the team will return to St. Joseph, Missouri for training camp in July and August of 2021. After a year away from Missouri Western State University due to health and safety regulations, the Chiefs are set to return to campus this summer.

Fans will be permitted to attend training camp this year, but with a few changes: Fans must reserve tickets in advance, and due to NFL health and safety policies, there will be no player-fan interaction, including autographs. | MORE

Ticket reservation will begin at 10 a.m. on Wednesday, July 7, according to the Chiefs. Fans will be able to reserve a maximum of four tickets per practice, and can reserve seats for a max of three practices through Chiefs Kingdom Rewards.

The full training camp schedule was also released by the team. It includes a pair of exclusive Season Ticket Member Days, as well as fourteen open practice dates. Admission of $5 is needed for practices on July 30 and 31, as well as August 8. The rest of the practices are free (though admission tickets must be reserved ahead of time).

Chiefs training camp will lead directly into the 2021-22 season, one many fans believe will end with the team hoisting their second Lombardi trophy in three seasons. | CHIEFS REGULAR SEASON TICKETS

The Chiefs officially open the season at 3:25 p.m. on Sep. 12 when they host the Cleveland Browns. It will be the first of nine home games for the Chiefs as the NFL plays their first 17-game regular season. The Chiefs also have home dates with the Packers, Cowboys, Steelers and Bills in 2021. | TICKETS