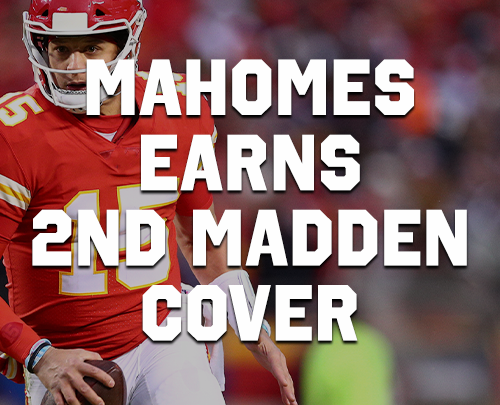 Kansas City Chiefs star quarterback Patrick Mahomes will be featured on his second EA Sports’ Madden NFL cover along with now seven-time Super Bowl winner Tom Brady.  Mahomes being on the Madden 22 cover means he, as well as Tom Brady, are the first athletes to appear on the cover twice.

Mahomes’ first appearance on a Madden cover came after his historic MVP season in 2018-2019. This is also Brady’s second appearance on the cover of Madden, with his first coming on Madden 18.

While many Chiefs fans will be anxious about Mahomes being on the cover again due to the “Madden cover curse”, the fans must not forget that after Mahomes was on the cover of Madden 20. The Chiefs went on to win the Super Bowl the following year.

With the addition of Mahomes to the cover of Madden 22, Chiefs fans will now be able to play with the cover athlete and then head over to Arrowhead Stadium to watch him play on the field. | TICKETS