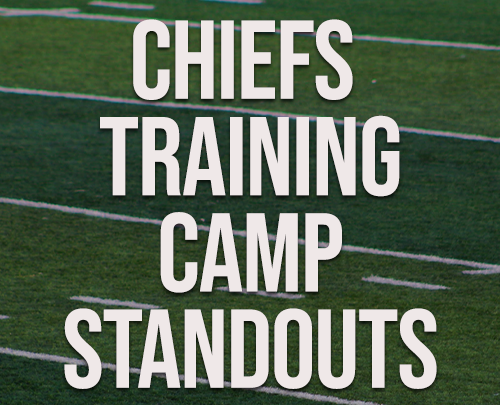 After the first week of Chiefs Training Camp in St. Joseph, Missouri, there is quite a bit of buzz surrounding some of the rookies as well as some other newcomers for the Chiefs. Here is a rundown on a few players who impressed in their first week of the season:

One player who allegedly stood out from the rest was this year’s sixth round pick, offensive guard Trey Smith. A massive but athletic lineman, Trey Smith has been described as someone who loves the violent aspect of football. These traits have earned Smith a spot on the starting offensive line unit, which was a far-fetched idea to most people after the Chiefs spent just a 6th round pick on the guard. Smith’s development will be key to the success of the line this year. So far, all signs are pointing to Trey Smith being the steal of the draft.

Another rookie who caught the eye of just about every person at camp was Noah Gray. A fourth-round pick from Duke, Gray has already been referred to as “Baby Kelce” by many of the lead reporters covering the Chiefs. After Travis Kelce left practice with back and hip tightness, Gray took over and did nothing but impress. Much to the delight of Chiefs fans, Gray clearly already has the trust of Mahomes. After years without a viable option for a backup tight end, it appears the wait may be over.

After a rookie season overshadowed by injuries and lack of playing time, second-year linebacker Willie Gay has blown away pretty much everyone that has watched him play thus far. Known for his speed and athleticism, Gay is looking infinitely more comfortable in Spagnuolo’s defense. Gay has been making play after play at camp, one of which he was able to stick with Tyreek Hill in man coverage before earning a pass break up. As expected, Willie Gay will be getting a lot more playing time this year and Chiefs fans should be nothing but excited to see what he will bring to the table.

Chiefs training camp will continue through the month of August, with the lone home preseason game set for August 27 against the Vikings. The regular season is set to kick off on September 12 when the Chiefs host the Browns at Arrowhead.