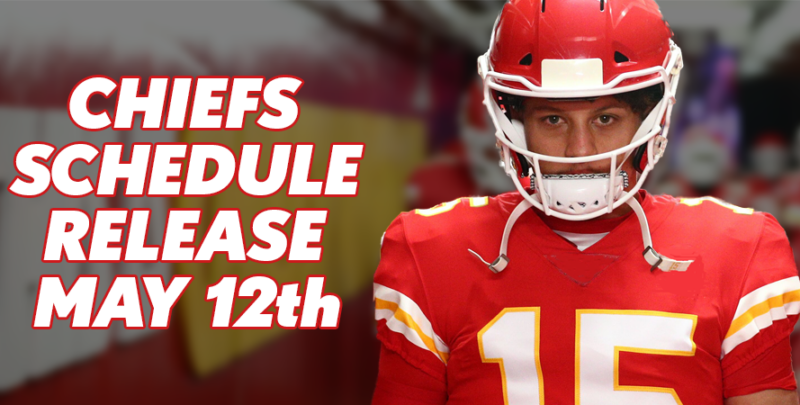 It was announced on Wednesday that the Chiefs, along with the rest of the league, will be releasing full regular season schedules on May 12th, 2021. The highly anticipated Chiefs schedule release on Wednesday, May 12th will come just 11 days after the 2021 NFL Draft.

This year’s Chiefs schedule release will have added excitement for a multitude of reasons. On top of a loaded home schedule and the addition of a 17th regular season game, the league also has plans to play games at full fan capacity in 2021. If all goes according to plan, the Chiefs will be playing all NINE home games in a packed Arrowhead Stadium.

While the full schedule will not be released until May 12th, the home and road opponents for the Chiefs are already known.

Once available, you can find the full Chiefs schedule with ticket links for each game here: 2021 Chiefs Schedule

You can also find tickets for every Chiefs home game when they become available here: Chiefs Tickets

The 2021 Chiefs schedule will include seven playoff teams from a season ago, including the Green Bay Packers, Cleveland Browns, Buffalo Bills and Pittsburgh Steelers, all of which will visit Arrowhead Stadium. Kansas City will travel to take on the Baltimore Ravens, Tennessee Titans and the Washington Football Team.

The matchup with the Packers is courtesy of an added 17th regular season game, which was agreed upon by the league and player’s association early in the offseason. With the addition of the 17th game, at least one preseason game will be removed, setting up a preseason bye week ahead of the regular season.