The Kansas City Chiefs quarterback position contains an interesting mix of names when you roll back the years. From Damon Huard to Len Dawson, there is truly any kind of quarterback.

It’s been a tough position for fans. Chiefs history is spotted with great quarterbacks amidst a host of busts and false hopes. Check out our list of the top five Chiefs quarterbacks. 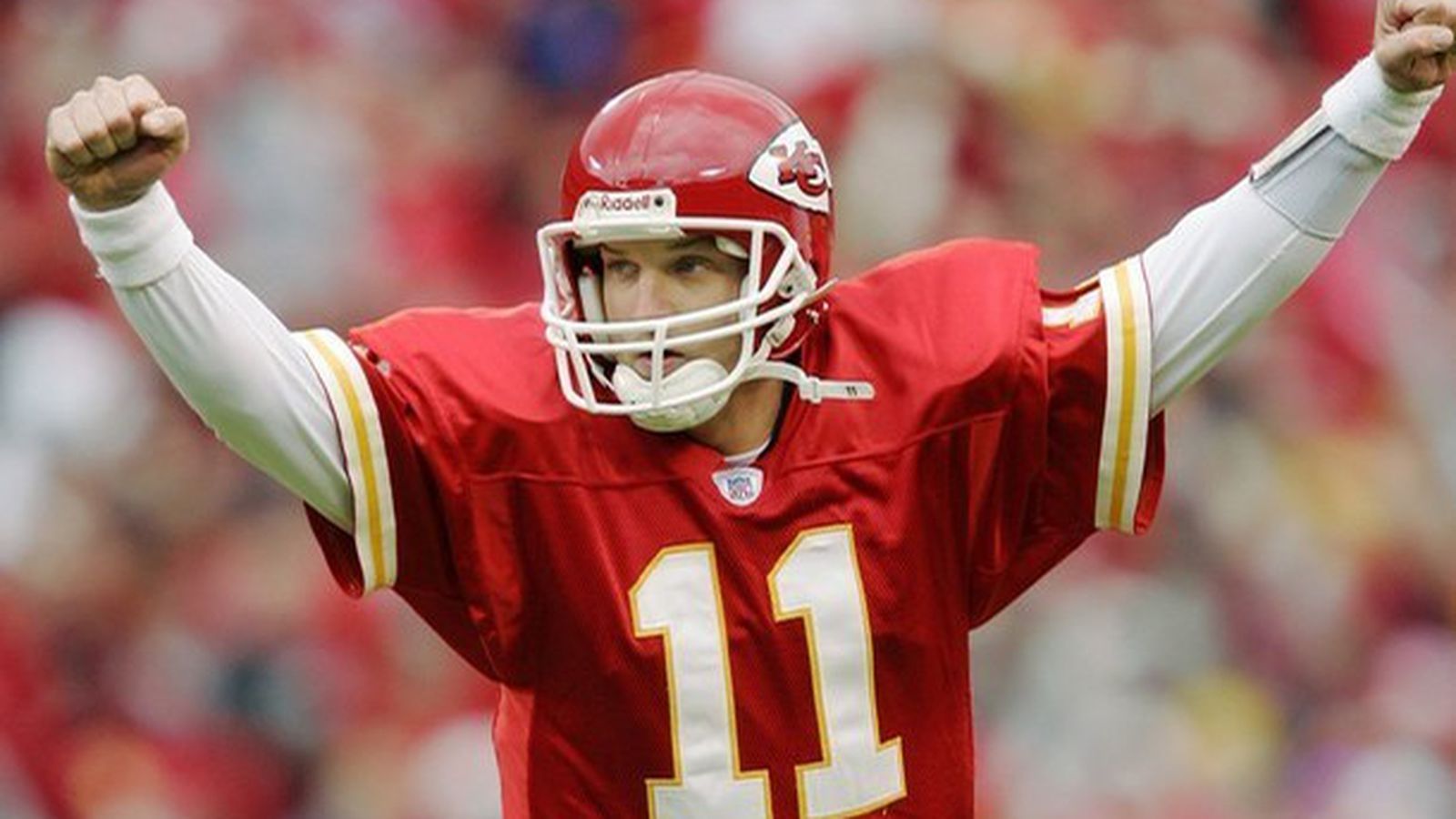 The Michigan product is quietly one of the better quarterbacks in Chiefs history. Grbac started at least 10 games in three of the four seasons he spent with the Chiefs, throwing for a total of 10,643 in that period. In 1999 and 2000, his two most productive years, Grbac threw for 3,389 and 4,169 yards respectively.

Kansas City only made it to the playoffs in one year of Grbac’s tenure. In the 1997 Divisional playoffs, Grbac threw for 260 yards in a losing effort to the Baltimore Ravens.

Grbac is a tough pick to make for this list, as his winning of the starting job led to the departure of Rich Gannon. Gannon went on to join the Chiefs’ biggest rival, the Oakland Raiders, and win a Super Bowl. For that, Grbac is one of the most hated players in Chiefs history. He is included on this list because his statistics warrant the spot.

Consistency isn’t what comes to mind when it comes to Chiefs quarterbacks, but Trent Green was a durable and consistent performer under center. Green holds the record for consecutive games started among Chiefs quarterbacks with 81. Green started every single game for the Chiefs from 2001 to 2005 and started half of the 2006 season.

During his best stretch as the Chiefs’ quarterback, Green and the Chiefs won the AFC West in 2003. He finished second in the league in passing yards each season from 2003 to 2005, earning two Pro Bowl appearances during that span.

His time with the Chiefs cements Green as one of the best in Chiefs history, but he wasn’t nearly as valuable to any other team. Green struggled with his hometown St. Louis Rams in stints before and after his six-season Chiefs career. Other stops in his career included the Miami Dolphins and the Washington Redskins.

Alex Smith is going into his fourth year under center with the Chiefs, but he’s already made a significant mark on Chiefs history. His name doesn’t scatter the record book yet, but if he continues the way he’s played so far it won’t be long. Smith has only missed two games in three seasons with the Chiefs.

Since the Chiefs picked up Smith from the 49ers in a trade, he has recorded impressive numbers. Smith threw for over 3,000 yards in each of his first three seasons with the Chiefs. His completion percentage never dipped below 60.

Going into the 2016 season, Smith has the chance to make history for the Chiefs. It has been a long time since the Chiefs had a roster as good as this one, and playoff disappointment has been a theme for the Chiefs in recent years.  The Chiefs haven’t made it to a Conference Championship since 1993. Crushing Divisional playoff losses to the Colts in 2013 and the Patriots in 2015 have made the drought painful.

The former standout with the New England Patriots threw for… Just kidding.

Joe Montana only played two seasons with the Chiefs, but he was still the Joe Montana we recognize in those years.

The biggest accomplishment, however, is Montana’s playoff success with the Chiefs. Montana brought the Chiefs to the team’s only Conference Championship since 1969. Although the Chiefs lost that AFC Championship game to the Buffalo Bills in 1993, it’s the farthest the Chiefs have gotten in the playoffs since the Super Bowl IV victory.

One of the first in a long line of great NFL quarterbacks to come out of Purdue is Chiefs legend Len Dawson. Dawson won the franchise’s only Super Bowl, defeating the Minnesota Vikings in Super Bowl IV in 1969. He was named Super Bowl MVP and threw for 142 yards and one touchdown.

Dawson is by far the longest-tenured of the Chiefs quarterbacks on this list, having spent nine seasons with the Chiefs. He scored 25 touchdown in three separate seasons, never letting his completion percentage below 50 for his entire career. From 1962 to 1968, Dawson threw for over 2,000 yards every season.

Originally, Dawson struggled to find his feet as a professional quarterback. He bounced around the pre-merger NFL, eventually being rejected by every team and moving to the AFL, according to a 1960 article in the Pittsburgh Post-Gazette. He joined the Dallas Texans in 1962, which relocated to Kansas City and called itself the Chiefs just one year later. In the only AFL year he played with the organization, Dawson won the AFL championship with the Dallas Texans in 1962.

Dawson looked beyond professional football even during his career. He was the sports director of the KMBC-TV in Kansas City starting in 1966, his fifth season as a Chief. Dawson still works at KMBC-TV today as its sports director.

Was our list accurate? Who would you have included? Leave your responses in the comments.

Tickets For Less is one of the largest sellers in the country of Kansas City Chiefs, Kansas City Royals, Kansas Speedway and Sprint Center tickets. To order, call 913-685-3322 or visit our website.